Forklift is a kind of industrial machine,which could ensure the capable of loading, unloading, stacking and short distance transportation of pallets. According to WITS, the global forklift sales reached the periodic low point in 2015, compare 2014, it  fell 0.40%, in year 2016 and 2017, forklift sales began to increase sharply, the growth rate reached 15.69% by 2017, however, influenced by factors such as slowing international economic growth and rising trade protectionism,the growth of the global forklift industry began to slow in 2018, the total sales volume of the forklift truck market worldwide in 2019 reached 1,493,300 units, that's up 0.26% from the 1.489 million vehicles in 2018.In the future, forklift replacing manual labor becomes an inevitable trend, the downstream industry has a long-term market demand for forklifts, which is a sunrise industry for a long time. 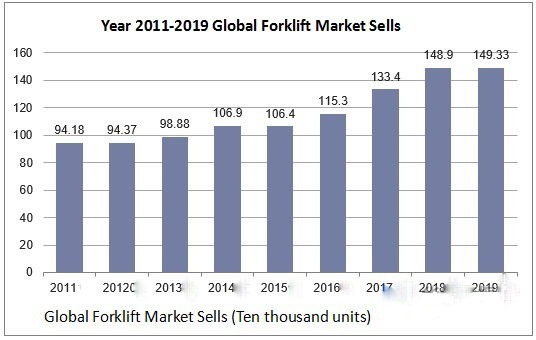